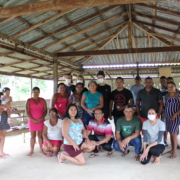 A transdisciplinary team of social and environmental scientists has just completed a campaign in the surroundings of Santarém, in the Brazilian Amazon. They aimed at meeting with local stakeholders in order to discuss artisanal fishing and the challenges facing this activity through a Serious Game.

Conducted as part of the BONDS and SABERES projects, the field mission in the Lago Grande do Curuaí region has just ended. For ten days, the Brazilian and French researchers carried out workshops in the riverside communities using an adaptive modelling approach, a participatory process that materialises in the co-construction of a serious game, ‘Pesca Viva’, in which the territory’s stakeholders are asked to play their own role. The game board and the different elements present on it try to reproduce the socio-environmental dynamics of the area in a faithful, albeit simplified, way, by integrating the knowledge of the researchers as well as that of the actors of the territory, especially the fishermen.

The workshops carried out during the current and previous campaigns allowed the participants to dialogue with each other and with the researchers, and for each person to share his or her point of view on the resource to be shared. Each game is of course a moment of fun and encounter, but it is also an opportunity for the players to express themselves on the game: does it reflect what is happening in the area? This allows the sessions to confirm or deny the closeness of the model with the reality, and can lead to changes in the rules of the game or the representation of the system (for example, changing the game board to fit the environment). In the long run, the aim is to arrive at a collective vision of the issues and challenges to be met in order to achieve sustainable management of the territory.

The lower Amazon region, especially the floodplains, have long been centres of human settlement. In recent decades, unprecedented population and economic growth have influenced resource use and challenged the ability to sustain humans and biodiversity in the floodplains and surrounding uplands. In addition, the integrity of Amazon floodplain habitats is increasingly threatened by dams, river navigation networks, agricultural frontier expansion and climate change. In this context, the BONDS and SABERES projects propose to develop biodiversity scenarios in the floodplains of the lower Amazon, by combining remote sensing, hydrological, fisheries and habitat modelling tools with participatory work that integrate local stakeholders, in order to combine biodiversity conservation and human activities, particularly fisheries, in a context of rapid socio-economic and climatic changes. 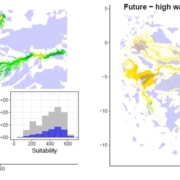 The INRAE team and colleagues  modelled the current and future (2070) distribution of Arapaima sp. accounting for climate and habitat requirements, with consideration of dam presence (already existing and planned constructions) and hydroperiod (high- and low-water stages). We further quantified the amount of suitable environment which falls inside and outside the current network of protected areas to identify spatial conservationgaps. We predict climate change to cause the decline of environmental suitability by 16.6% during the high-water stage, and by 19.4% during the low-water stage. We found that two thirds of the suitable environments of Arapaima sp. remain currently unprotected, which is likely to increase by 5% with future climate change effects. Both current and projected dam constructions may hamper population flows between the central and the Bolivian and Peruvian parts of the basin. We highlight protection gaps mostly in the southwestern part of the basin and recommend the extension of the current network of protected areas in the floodplains of the upper Ucayali, Juruà and Purus Rivers and their tributaries. This study emphasises the importance of taking into account hydroperiods and dispersal barriers in forecasting the distribution of freshwater fish species and protection status assessments. 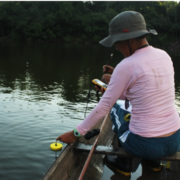 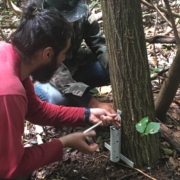 Jefferson Ferreira-Ferreira (Mamirauá Institute for Sustainable development) and Marie-Paule Bonnet carried out a short field mission in Juruá. They met with some community association presidents and explain why monitoring water levels in the region is important. They installed 5 sensors that record the water levels daily and recruited local observers to monitor water levels on […]

The coordinator (Marie-Paule Bonnet, IRD, UMR Espace-DEV) and the two leaders of the Data Management task (Claudio Clemente Faria Barbosa from INPE and Eric Chenin IRD, UMR UMMISCO involved in the GBIF French node) participated the meeting. It was an opportunity to meet the coordinators of the other winning projects of the BiodivScen 2018 call, and to participate in a short presentation of all these projects. The meeting agenda and the presentation of BONDS made on this occasion are available in this directory

We also participated in a session dedicated to data management, and a set of recommendations was made to ensure that the data acquired by all laureates’ projects will be made available to the scientific community. Some slides and guidelines are available in the directory indicated above.

All partners meet in Montpellier at the Remote sensing Institute for two days. These two days of intensive exchanges allowed us to get to know each other better, to share some of the knowledge and know-how of the different groups involved, and to specify the modalities for the implementation of the project.